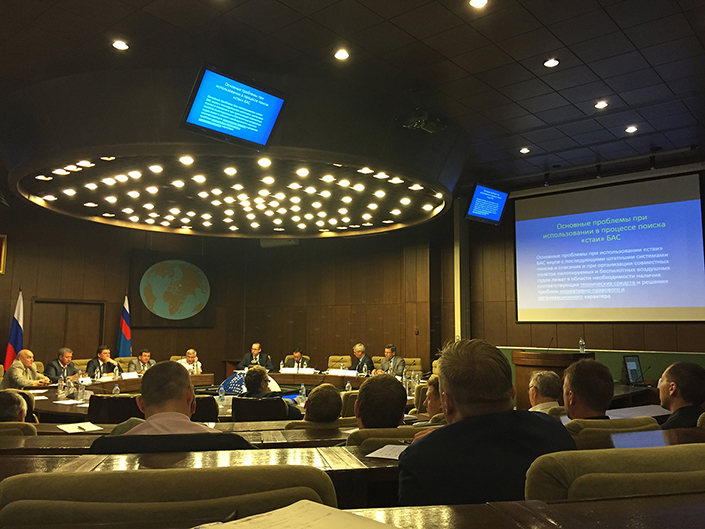 At the beginning of June in Moscow, head of the Department was held scientific-technical conference "Application of unmanned aircraft systems in support of a unified system of aerospace search and rescue". The event was opened by a theoretical part, during which participants had the opportunity to read the reports of representatives of Federal air transport Agency, GosNII as, GosNII GA and manufacturers of UAVs. Pleasantly pleased with the thoroughness and specifics, which pervaded all the theoretical part, the presentations were accompanied by a large amount of statistical information, illustrations and videos.

Questions were raised about the feasibility, safety, and prospects of the use of drones in search and rescue, including those operating in non-segregated airspace. Of conference materials it follows that the use of unmanned systems can significantly reduce the cost and simplify the procedure of searching from the air without compromising quality of work. In addition, speed of deployment and mobility systems allow you to start a search operation in the shortest possible time. At the same time, according to most speakers, the use of ADS-b (automatic dependent surveillance-broadcast) would allow the combined use of manned and unmanned equipment in the search area.

The second day of the conference, in fact, was aimed at confirming these findings in the field of airfield Alferovo.

Organizers on the ground larger than 4 square kilometers were modeled situation of a plane crash in rugged country at different points were placed imitation of the wreckage and the victims, which were to be discovered and "rescued" by two plane-like drone, UAV helicopters, aircraft An-2 and the group of paratroopers with a mobile quadcopter with the ability to broadcast video online. All the equipment and one of the paratroopers were equipped with beacons system ADS-b, allowing managers to efficiently manage a search party from the mobile command post, and viewers watch "live".

Less than an hour managed to find the wreckage to determine the whereabouts of the victims and their status, and most importantly to provide them first aid and bring a first aid kit the most "hard to reach". It should be noted that during the search there was not a single case of conflict, pilot and unmanned aircraft in a single air space, and the actions of the crews were coordinated and consistent. The conference clearly demonstrated that the UAV will inevitably be increasingly integrated into the aircraft and to play a significant role in my life. Many tasks not only possible but more effective in dealing with this type of technology. The only question is, what the regulatory environment will be created to regulate activities related to UAVs. I sincerely hope that the Russian aviation authorities will find the answer to this question in the near future!